This page is for personal, non-commercial use. You may order presentation ready copies to distribute to your colleagues, customers, or clients, by visiting https://www.parsintl.com/publication/autoblog/

How to tune a car right: Part 2, tuning Ford with BA Motorsports

Not long ago, I wrote a story about a pony car tuned with a supercharger. The blower install had been done properly. Then the car's owner bolted on a set of great looking wheels wrapped in good looking but inexpensive rubber. On my first test drive, I couldn't get any of that supercharged sweetness to the ground. It was the perfect ride for parking in a Burger King parking lot on a Friday night. I tooled around on a Sunday drive, shaking my head that someone had spent five figures to get more power the right way, with a clean install, then wiped out the gains so thoroughly that the stock engine would likely have overwhelmed the tires.

This got me thinking about the ways people ruin their quests for horsepower, either on the front end (by not insisting on a clean install and paying the money for it) or on the back end (with supplemental purchases like cheap tires or cheap gas). So I called three tuners, one focused on GM, one on Mopar, one on Ford, to find out what people should know about how to get the best power for their goals, and how to make sure they are able to use all that power. The first interview in this three-part series was with Blake Leonard at Top Speed Cincy in Cincinnati, Ohio. The second is with Brandon Alsept at BA Motorsports in Milford, Ohio. In addition to building a non-stop procession of Ford-powered drag racers with four-figure horsepower, he does the supercharger installs for the $45,000 Mustangs sold by Beechmont Ford Performance.

The interview has been edited for clarity and concision.

Are Mustang buyers usually looking to put huge numbers in from the get-go?

I would say over 75% of the people that come to see me are after big numbers. Most will come in with their dyno graph or dyno video and say, "I want that."

What’s the most important part about choosing a tuner?

The biggest thing is find someone that has done what your end goal is, and listen to them. Find someone you like, that you communicate well with, and listen to what they tell you, and you're going to have a good product in the end. Do your research. There are reviews everywhere about everything now, you can find people that have had good results. 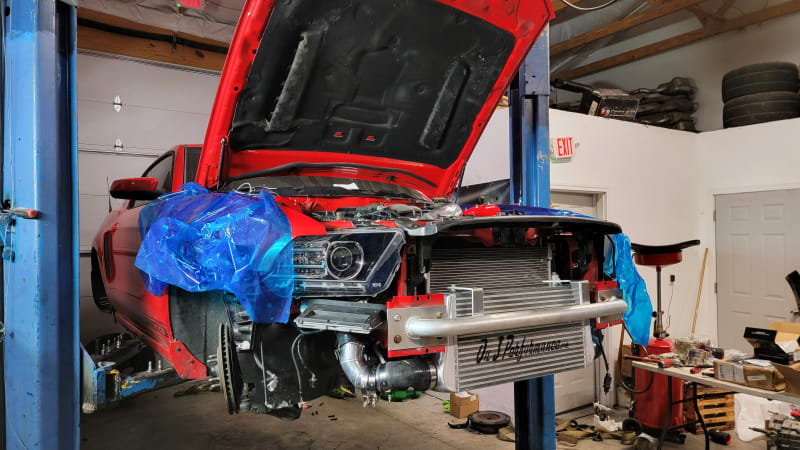 When they’ve found a tuner, what should they ask?

Reputable tuners aren't going to have problems answering some small questions for you. If it's, ‘I'm looking at this, I want to get a tune from you guys, what would you recommend as far as fuel injectors or fuel system?’, nobody should have a problem spending a couple of minutes to answer that for you. Just try not to wear them out on a quote – ‘This person said this, this person said that.’ Tell them straight out at the beginning, ‘Hey, this is what I'm wanting to do, what parts do you suggest?’

What are the mistakes people generally make?

The biggest thing I see is people get these huge numbers in mind and they just want the end number, they skip some steps in the middle. People leave out addressing the stuff that supports your power. They want to jump around or buy cheaper parts here and there instead of going to a shop that's got a lot of experience with the car they’re working on and listening to what [the shop says] and the brands they suggest. Instead, it’s "Well, I know you wanted to use this part or this brand, but I was able to find this part on eBay for a quarter of the price so I think I'll try that." Keep your ears open to what they're trying to tell you – it’s not always trying to upsell you. It's more that shops don't want to see people leave and blow stuff up and have a bad experience. That's not good for their reputation or their business. 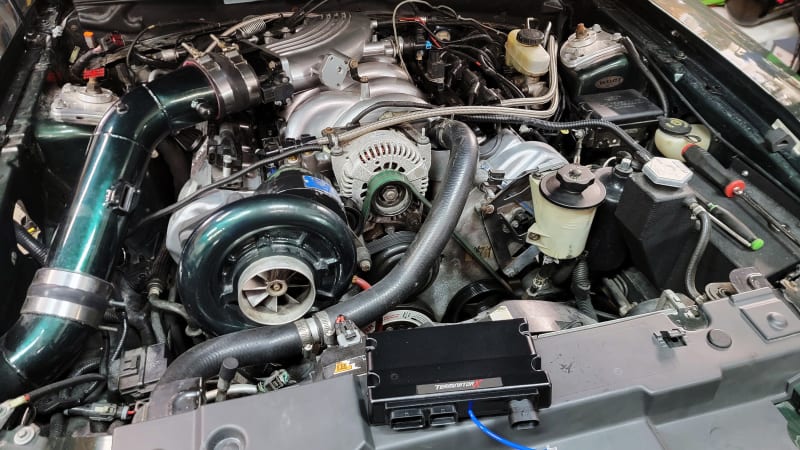 What parts do people try to skip, or skimp out on?

Fuel systems seem to be the big one. Say you put a supercharger on your 2018 Mustang and you want to switch over to E85. Those fuel systems are going to run a couple thousand dollars to get good pieces in place – everything from the gas tank to the cylinder. I get it, it's a very expensive hobby we play in here. But if you don't have fuel, you can't make power.

Say I have a stock 2018 Mustang, if I want big power, what should I be looking at first?

The Coyote engines are known for breaking the oil pump gears, so we suggest doing oil pump gears and crank sprocket before we start trying to tax it. From there, the engine is pretty decent – we've made over 1,100 horsepower to the tire on cars and all they've got are oil pump gears and crank sprocket and supercharger. After that, we'll usually point them towards driveline parts – you’re going to start stressing and breaking stuff, transmissions, clutches, half-shafts, driveshafts. We want them to be aware going in, if the budget allows it you should probably try to do this now. If not, then be prepared.

What about doing a cold-air intake and exhaust, how much power can I expect from that?

A cold-air intake, exhaust, and a tune? Thirty to 50 at the wheel. But this gets to a point where it's good to talk out a person's plan. If you’ve got a goal where a part's going to be become null and void once you do Part B of your plan, we try to make people wait. 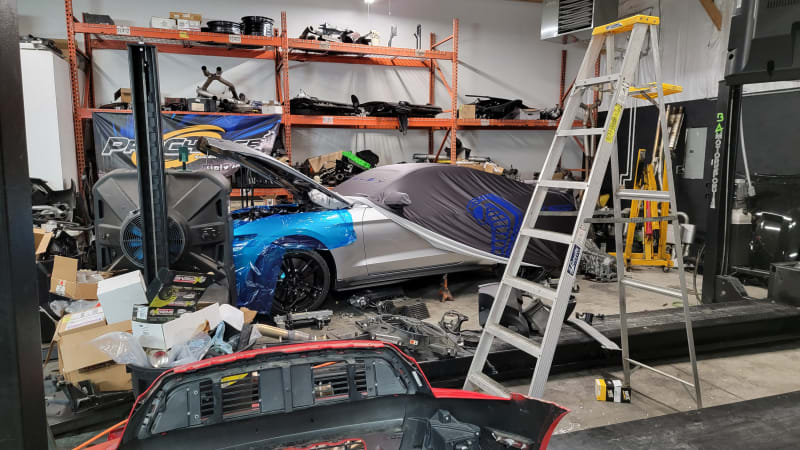 So someone says, “I've got $3,000 right now,” but they know that down the line they want to spend 15 grand, maybe they should skip some parts?

Exactly. We've talked a few customers out of sales. For instance, someone says, "I want long-tube headers on the car, but I want to put a turbo on it next year." They're investing the money wrong, because there are headers specifically for turbos. Save your money and you can get your turbo kit sooner. When you know you're going to take off A, B, and C, it isn’t a good enough investment to do them. And to me, most of this stuff isn't really a good investment.

With internal parts like cams, do you suggest doing other parts once you're taking the top end apart since you’re already in there?

It’s a conversation to have when we're doing stuff like the oil pump [to get the] minimal labor time investment. We'll make people aware, ‘If we're going to be this far down, you should think of doing this while we're here because it's going to save you money.’ 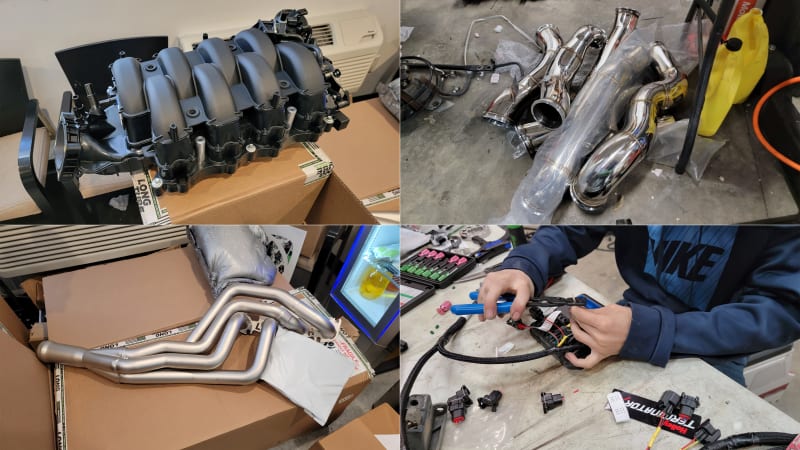 Have you seen somebody spend the money to do a tune properly then ruin the tune with separate, inferior component?

I don't see a lot of that, but I see a lot of people wind up kind of lost. Some people think ‘If it worked for one person, it will work for everybody,’ so they think ‘I can put this part on and this part on and this part on,’ then [the parts] don't mix and you don't end up with a good end product. It comes back to someone that's got experience with what you're wanting to do. That's usually worth its weight in gold, understanding how everything works together, not mix and match everything and then expect it to run like it would for somebody that had everything done the proper way.

So be ready to invest the time and money to do it right.

Exactly. When customers say ‘I want more horsepower but I don't have a lot of money,’ I try to be transparent and go through it all so they either A, pull the trigger; B, save a little bit more money so they can do this the right way; or C, go to somebody else and then come back to me in a year or so when everything's blown up.

Land Rover Defender 110: Can you sleep in it?

Thanks for subscribing.
Check your in-box to get started.

We get it. Ads can be annoying. But ads are also how we keep the garage doors open and the lights on here at Autoblog - and keep our stories free for you and for everyone. And free is good, right? If you'd be so kind as to allow our site, we promise to keep bringing you great content. Thanks for that. And thanks for reading Autoblog.

Here's how to disable adblocking on our site.

You still haven't turned off your adblocker or allowed our site. It only takes a few seconds.

You must be logged in to perform that action.